Skip to content
Logic No Pressure Lyrics :English song “No Pressure Intro” from the Album No Pressure sung by Logic.Produced by Like & No Pressure lyrics Written By Like, Logic & Orson Welles. 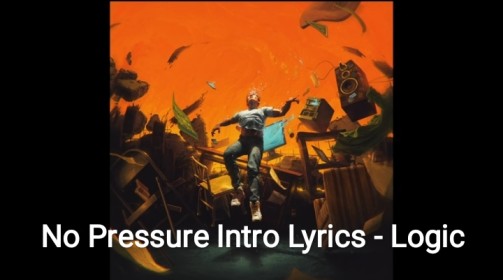 Welcome to the No Pressure program
Good evening, this is Logic
And very happy I am to be back in the United States and back on the network
Even for so short a visit as this one
Back with old friends like No I.D. who is tonight’s director and
Nobody argued the point, a lot of people asked us to do it again, so it’s gratifying to get the chance to do it again
So it’s gratifying to get the chance now (No I.D.)
Personally, I’ve never met anybody who didn’t like The Incredible True Story
Now tonight, what we do have is a thriller
If it’s half as good as we think it is, you can call it a classic
Quite possibly, a little escapade of mine involving a couple of planets which shall be nameless
Is responsible
Doesn’t really matter
A story doesn’t have to appeal to the heart, it can also appeal to the spine
And with two magic words
Ayy, no pressure
Never graduated, but I school ’em like professor
Growing up, the world always told me I was lesser
Growing up, the world told me I could not address her
Gangsters put that heat to your head like a hairdresser
If you press a issue on they block
(Hey, Logic, Snake here
I hear you’re planning world domination through a new form of Metal Gear
Well, listen to me, it won’t work)
This liquor that I’m drinking got me thinking ’bout some other shit
Feeling like I’m sinking like Titanic or some other ship
Word to your mothership, boy, this that gutter shit
Breaking down the weed to get high as Thomas and Kai
But y’all ain’t ready for that shit, that’s more like Ultra 85
Memories of powdered milk and roaches in my cereal
Praying that my crew next like cotton material
Never had a car, that’s why I hate the fuckin’ bus
Took the 61 to Germantown and hear them guns bust
Call it static, my headphones on, it’s Illmatic
On my Rosa Parks, in the back writin’ like B-Rabbit
How I carry it, murder the beat and then I’ma bury it
Producin’ tracks for the underground like Harriet
Drop another number one and watch ’em all get mad again
Memorizing verses like the Vatican, I’m glad again
Empty the clip and then do that again
And now we ridin’ ’round the city on a dollar twenty-five
Boy, you better keep your head down if you wanna stay alive
People telling you to stay in your lane, can’t even drive
Tell you not to chase your dreams ’cause they chained to a nine-to-five
Bitch, I’m too alive like twins in the womb, come hither, consume
All of my memories from past and present like two identities
Logic fallin’ off is an obscenity
Top five I better be, steadily
Doggin’ these bitches like I’m a Pedigree
Obtain class with no degree
Fuck a GED, EBT, and the HOC
Feeling free, yeah, I’m feeling free
But it cost a fee to be the boss it cost to be
Over possessions like an apostrophe
It’s chemical warfare on the block, who got the rock?
A tablespoon of baking soda leave you shellshocked
Leave the pusher in a cell block and his customer in a box
The government got my pops
The government can’t be stopped
I’m a gladiator, this shit right here more like random thought
It’s more like
We interrupt this transmission with a special report