SAY MY NAME (English Version) Lyrics by KRSNA.SAY MY NAME song Is Sung by Krsna. 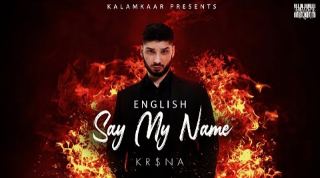 All my life been an underdog
But when I write, feels like a thunderstorm
When the beat go bum’pa pumpapumpum
I gon’ feel like I’ve brung a bomb
Set fire to the game they gon’ fear me
Tryna compare but they ain’t really coming near me

Talking shit on they Instagram lives, They be lying
In these lines, through the grapevines, they gon’ hear me
Say my name say my name (yeah)
I made desi rap Wrestlemania
They were handing out friendship bands

Then I came in click-click bang
Now they’re like damn, what is this behavior?
You can pray to your Lord and Saviour
Brigadier of this Rap game
Killing whacks names, while I tap dance
Right up in the graveyard (yea)
Sending me Subliminals, but I’m the pinnacle
Leave’em critical in the physical pain, Krsna is mythical
Clinical Aim, shit I’ll bang the same syllables
With blood on my name
I’ll remain a blamed criminal
Ain’t typical, I be busting like an Ak

Been dropping Grapes Sice I was up in the 8th Grade
In a room with a cheap mic and some egg crate
A vet keeping rappers in chick like It’s a payday (Ah)
Hear everything the be saying about me
Just don’t bring me up If it ain’t about me
You know how this reality go
If you been on a reality show
Then you ain’t gon’ stop me
I’ve doing the killing, I’ve been in it
—–
SAY MY NAME Lyrics (English Version) Song Lyrics, if you find any mistake then Comment with correct Lyrics.
Q. How much do you like This Song?
SAY MY NAME (Hindi Version)